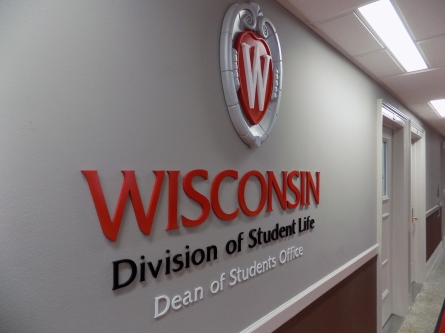 Hill explained that when women of color experience sexual assault they are over sexualized, discredited and lack faith in law enforcement or systems of authority. She said some institutions lack cultural competency.

One example she referred to was the University of Wisconsin Police Department’s “Don’t be that guy” campaign which she said lacks representation of people of color and non-heterosexual people. She feels like the campaign reinforces gender binaries.

“I think that it’s important to think about gender fluidity,” she said about discussing sexual and gender-based violence.

“Given the survey data, the [LGBT] Campus Center population was identified as at a high risk,” LGBTCC Assistant Director Katherine Charek Briggs said.

The report indicated while one out of three women will experience sexual or gender-based violence before leaving the institution while American Indian/ Native American Women, LGBTQ+ students and students with disabilities experience violence disproportionately.

“There wasn’t a breakdown of queer people of color,” they said.

Charek Briggs said more date would help a service determine where to allocate resources towards for prevention. Also, they explained members of these particular groups could have different experiences of sexual and gender-based violence because of their identity. In many cases, someone’s identity could define how they proceed after experiencing violence.

“Trans communities are less likely to disclose or feel safe if they disclose,” they said.

While this was the first report, which collected data about sexual and gender-based violence at such a comprehensive scale at the UW-Madison campus, many communities said some information was left out.

Adams, a Black woman and feminist who serves as the Outreach Coordinator for the Campus Women’s Center said administration could engage more. She suggested it be mandatory for administrative staff to attend events about manifestations of rape culture in diverse communities hosted by student organizations.

Some students requested more intersectional categories. This would include information such as how many transgendered women of color experience sexual and gender-based violence, which Raphael said could expose the respondents, but instead suggested offices serving those populations conduct more qualitative research.

“We didn’t want to out someone or have them stigmatized,” she said.

Raphael also said a gap between students and administration likely exists due to lack of knowledge of administration’s involvement in addressing rape culture in those particular communities.

Adams and Hill both said administration should engage more with student organizations already discussing rape culture through an intersectional lens. They both said sexual violence affects everyone no mater how they identify.

Nielson said she prioritizes intersectionality when working towards sexual violence prevention in order to represent all experiences as opposed to just the mainstream narrative and/or ideal. Raphael refers to this as the “stranger jumping out of the bushes” narrative or a narrative always involving cis-gender white women and men.

Charek Briggs said information and statistics about those affected disproportionately should be shared with larger mainstream audiences as well.

Raphael said her and her colleagues were deliberate in choosing which data to share in order to ensure the comfort of audience members apart of the populations affected disproportionately.

“There’s been a huge shift when talking about those topics,” Nielson said.

Most of these organizations and offices will serve the needs of all students including those of color, LGBTQ+ and with disabilities. Raphael and her colleagues in Bascom Hall will continue to assist students who are seeking support or have or are experiencing sexual violence through the UW-Madison Office of Student Conduct and Community Standards.

“Sexual violence affects everyone differently, but I am confident in my colleagues,” Raphael said.